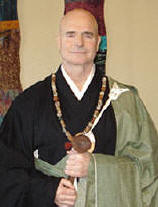 Taiso has studied and practiced Buddhism, T’ai Chi, and other eastern arts since the 1970’s. He has practiced Zen with Hollow Bones and several midwest groups. Taiso received Jukai in the Hollow Bones Rinzai Order with Jun Po Kelly, Roshi in 2005 and received Hollow Bones Priest Ordination on Mother’s Day, 2007. Taiso received Inka, dharma transmission on December 3, 2011. He currently serves as head priest of Zen River Sangha and Secretary of Friends of Zen.

He earned a BS Ed degree in Human Services and a Master of Public Administration degree. Since recovering from addiction in the 1970’s, Taiso actualizes the mission of easing suffering and service through support of this journey. His recent professional experience involves leadership of treatment programs at the nexus of the mental health and criminal justice fields. He has also taught courses in social science, technology, and research methods. Among varied interests, he is a father, sailor, scholar, and patron of the arts. 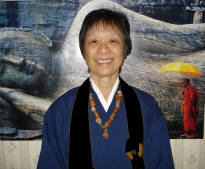 Reishin Dai Nei Denise Leong has been in the Hollow Bones Zen sangha since 2005, taking jukai vows in 2007, and ordaining as a priest 2010. She currently serves as one of four teachers at the Zen River Sangha in Appleton, Wisconsin. For six years, she also served as Inji to Jun Po Roshi, former Abbot of Hollow Bones Zen.

Reishin spent forty-two years in education as a teacher in middle school, high school, college, and finally as the IT director for a public school system. In her retirement, Reishin has been blessed with the opportunity to serve as a chaplain for a local hospital since 2018.

After twenty years of doing volunteer work in hospice, Reishin recognized the importance and value of death awareness. She has embarked on a new journey of sharing death awareness through the Hollow Bones Zen course “Zen and Facing Sickness, Old Age, and Death,” as well as hosting Zen Death Cafes online. She has a certificate as an End-of-Life Doula through the University of Vermont School of Medicine and as a Grief Support Specialist through the University of Wisconsin.

She lives a quiet life in rural Wisconsin with her husband where each day she remembers the koan her Alzheimer’s-stricken mother repeatedly gave to her:  “What time is it?” 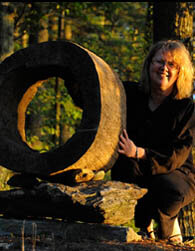 Kevala lives in Wisconsin where Rinzai Zen found her under the most unlikely circumstances.

She began practice in 2002, delighted to have found Buddha, Dharma and Sangha, a living teaching of Zen, in the basement of a Catholic abbey in Green Bay, Wisconsin.

Attracted to the clarity and truth of Zen, chanting the enigmatic Heart Sutra opened a door.  Hollow Bones Five Training Element Practice gives a structure to bring this practice into the world.

She took jukai in 2005 and ordained as a priest in 2010, vowing to serve and liberate all beings, to enlighten her shadow states, to master true teachings and to follow her true path.

Her background has been as a business analyst, and she is trained as an Ayurvedic educator with further clinical training in this ancient healing art.

“Gratitude to all who made it possible for me to find this path, to those who walk with me, and who help me see the weeds in my way.” 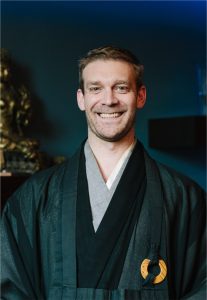 Soham Clint VanEgeren has been practicing Yoga and Zen meditation since 1996. In 2004, Soham was ordained as a Zen priest in the Hollow Bones Zen Order with Jun Po Roshi. Soham spent four years training and studying at various Zen centers. Soham has been staffing and leading Zen retreats since 2000. 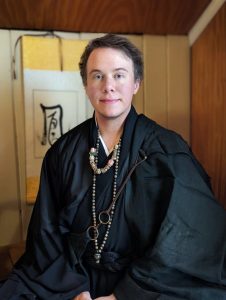 Liaoran Bo Re Spencer Grey Kindred took jukai June 4, 2013, and was ordained on December 5, 2014.
His path has included conservative Lutheranism, paganism, ceremonial and chaos magic, frequent existential crises, and colorful life choices. He and his husband live on top of a mountain in rural West Virginia.

Manju Bill Frackelton died peacefully with his family and friend at his side on Sunday, March 6, 2022, at 4:42 p.m.

Manju Usra Bill Frackelton began Rinzai Zen Buddhist practice in 1993. He took lay practitioner vows with Jun Po Kando Kelly in 1998 and was ordained as a lay priest in the Hollow Bones Order in 2003. Manju was a military veteran, social worker and prison chaplain. In addition to the Zen River Sangha practice community, he was active in supporting formerly incarcerated persons in their successful return to our community.